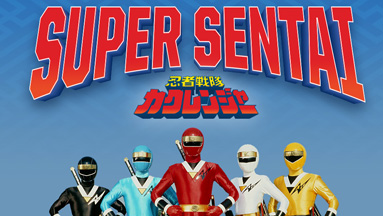 Shout! Factory TV is your home for Super Sentai, where you can watch the complete series across a wide range of digital streaming platforms. See where the worldwide phenomenon began with the original Japanese series that inspired the Power Rangers franchise! Check out the lineup below!

When the sinister witch Bandora is released from her prison after 170 million years, five warriors from an ancient time arise from their suspended animation to once again defend Earth from Bandora and her evil horde. Armed with enchanted weapons and giant robotic deities known as the Guardian Beasts, it's up to these warriors to defeat Bandora and her monsters before she can exact revenge upon the Earth!

The three Tribes of the Daos Empire -- Shura, Dai and Gorma -- were peaceful until the Gorma set out to conquer the planet, launching a magical war between the Gorma and Dai Tribes that lasted for centuries. In the end, both civilizations were lost…until now. The evil Gorma have returned. Now, it's up to Master Kaku to assemble a team of kids with high levels of Ch'i to become the protectors of the Earth known as the Dairangers!

It’s been a long time since the great war between the Three God Generals and the Youkais, an ancient race of monstrous spirits. Since then, imprisoned in a cave protected by the mystical Seal Door, their leader Daimaou and his Youkai army wait, planning for the day they can finally strike. That day has arrived and it is up to the Kakurangers, along with the Three God Generals, to defeat the Youkais, before Daimaou's villainy destroys Earth!

It is the year 1999. The Machine Empire of Baranoia, led by Emperor Bacchus Wrath, has invaded Earth to wipe out all human life and bring about machine rule. In order to quell the invasion, Chief Counsellor Miura of the UAOH (United Airforce Overtech Hardware) has revived super energies born of the lost civilization of Pangaea. Enlisting an elite squad of UAOH officers, Miura has harnessed Tetrahedron Power, granting the team the power to transform into the Ohrangers … and save humanity from its darkest crisis yet!

When his video game prowess is discovered by the International Network of Excel-Science and Technology — or I.N.E.T. — high school student Kenta Date is brought in to lend his expertise to their mysterious research. Meanwhile, four classmates show up, wanting to know more about the I.N.E.T. facility. Their experience will change their lives forever, as I.N.E.T. survives an attack by the nefarious Dr. Hinelar and an army from another dimension determined to conquer our reality! Now, it's up to Kenta and his four classmates to "install Megaranger" and become the team of heroes their video games prepared them to be!

After the Bowzock, a ruthless — not to mention reckless — gang of interstellar biker thugs, destroy his home planet of Hazard, Dappu visits Earth where he discovers five humans with the ability to harness "Carmagic." With this power, these five heroes can defeat the Bowzock before the band of witless bikers is able to add Earth to its list of wrecked worlds.

Three millennia after the first invasion of the Space Pirates Barban, a new set of Gingamen -- Hyuuga, Gouki, Hayate, Hikaru, Saya -- have been selected to protect the Earth. That is, unless the Barban are able to disrupt the ceremony!

The Grand Witch Grandiene has been waiting for the day of resurrection, the day when the planets are in alignment so that her children can descend to the Earth and turn it into a realm of darkness! Ten years prior, Professor Tatsumi of the Tatsumi Disaster Prevention Institute had predicted this event, but nobody believed him. He secretly developed and constructed the Rescue System. Now, Professor Tatsumi appears again to give the means to save the world ... and the heroic Kyuukyuu Sentai GoGoFive team springs into action!

It's the 30th century and time travel is illegal. To help monitor and police time crimes, the Time Protection Department is founded. But when Don Dolnero and his nefarious gang manage to trick four new TPD cadets into allowing them travel to the 20th century, the four cadets are forced to pursue them for the sake of history. There, in a time foreign to them, the cadets enlist Tatsuya Asami, a young martial artist, to aid their mission. Together, these five youngsters become the Timerangers. And though they try to live as ordinary 20th-century citizens, the Timerangers dedicate their lives to stopping Dolnero and others that may follow in his footsteps, attempting to forever alter the proper timeline!